Donors, citizens, companies and innovation come together to see how they can rebuild the 856-year-old cathedral.

The Notre Dame Cathedral in Paris experienced a devastating fire which has destroyed its roof and caused its spire to collapse.

The hard labor through the night of firefighters, police, and citizens were able to save the 850 year-old building’s main structure and its two main towers despite the tremendous flames with unclear origin despite investigation from the prosecutors’s office.

It has now become a matter of seeing how the gothic monument can start to recover.

A video game can save Notre Dame

If you still need a reason to stop thinking of video games as child’s play, here is another one.

Not only have video games rapidly turned into one of America’s fastest growing economic sectors, providing more than 220,000 jobs in communities across all 50 states, now, Assassins’s Creed: Unity’s virtual recreation of Notre Dame could now play a vital role for the reconstruction and historical preservation of Notre-Dame.

Assassins Creed is well known in its world recreation of actual locations, but as “Assassin’s Creed Unity” was set in Paris, and it took the artist of the game, Caroline Miousse, two years to perfect Notre Dame‘s appearance, right down to ensuring that each brick is where it should be, it could be of great use to map out the structure and start its reconstruction.

Caroline Miousse also worked with a historian to research and build every section of the building, faithfully rebuilding the cathedral in a 1:1 ration. The team even helped figure out the exact paintings that were hanging on the walls. With so much details poured into the game, it’s hard not to see how it can help to restore the historic building or the benefits of video games in how they can also preserve and maintain history.

In another way of helping, there are donors.

According to Jerry News, Bernard Arnault, the chief executive of LVMH, owner of 70 brands, including Louis Vuitton and Hennessy, will donate 200 million euros (close to $226 million) for the restoration and recovery of the sacred cathedral.

On another bid, the CEO of Kering, a conglomerate that include Saint Laurent and Gucci, pledged 100 millions euros, approximately $113 million to rebuild Notre-Dame. The Pinault family, which operates luxury conglomerate Kering, has also pledged €100 million ($113 million).

Data from CNN Business states other French companies have also written big checks: The oil and gas company Total has promised €100 million ($113 million), while tech and consulting firm Capgemini will give €1 million ($1.1 million).

“This tragedy is striking all the French people, and beyond that, all those attached to spiritual values,” François-Henri Pinault, the CEO of Kering, said in a statement.
“Faced with this tragedy, everyone wishes to give life back to this jewel of our heritage as soon as possible,” added Pinault, who is the son of the billionaire businessman François Pinault.

The Notre-Dame cathedral was half destroyed in the early 19th century, and it was through Victor Hugo’s novel “Notre-Dame de Paris” that gained it enough attention to be restored.
The spire that fell during the fire was built during that time, and was a taller and more ornate reconstruction of the original one, which means Notre Dame had been destroyed before, and was rebuilt. Therefore, it can be rebuilt again.
Click here to see how a tech-savvy art historian uses lasers to understand how medieval builders constructed their architectural masterpieces. 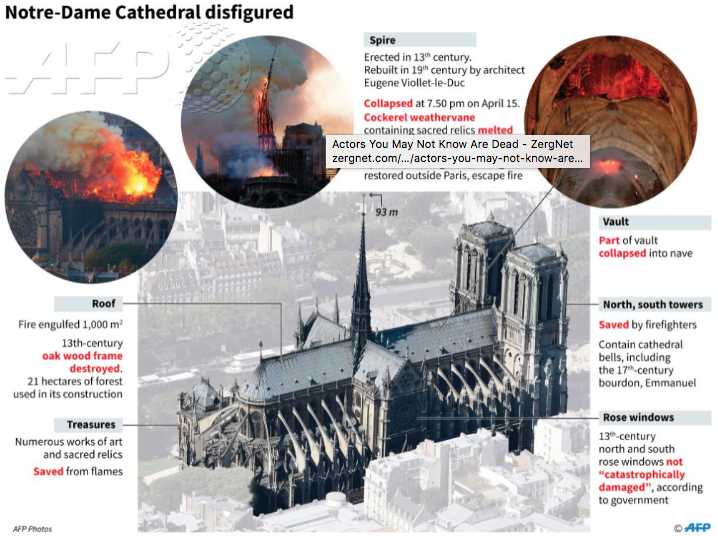