South Korea and Sweden lead as the world’s most innovative economies.

South Korea is the world’s most innovative economy, according to Bloomberg‘s top-ten innovation index.

The U.S., on the other hand, fell out of top 10 for first time in the gauge’s six years. 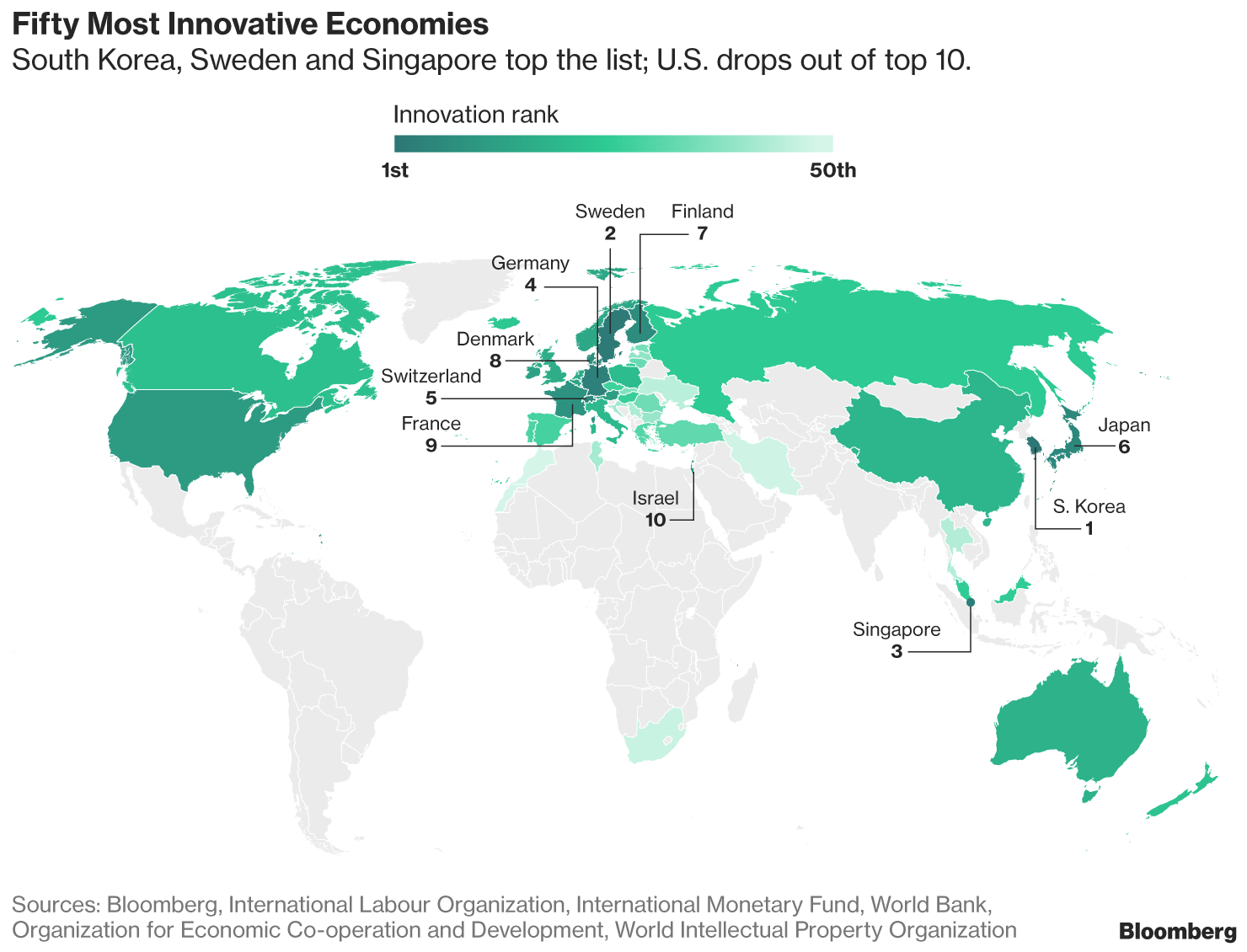 The top 10 in innovation, according to Bloomberg.

In other key findings inside the research, Singapore ranked ahead of Germany, Switzerland and Finland.

On the topic, Yeo Kiat Seng, professor and associate provost at the Singapore University of Technology and Design, stated “Singapore has always placed strong focus on educating her populace, especially in STEM (Science, Technology, Engineering and Math) disciplines.”

For the fifth consecutive year, South Korea remains the global-innovation gold medalist as its smartphones and digital-media equipment spawned an ecosystem of Korean suppliers and partners similar to what Japan developed around Sony Corp. and Toyota Motors.

China closed in at position No. 19 due to the high proportion of new science and engineering graduates that adventured in the local labour force.

The other Asian parties were Malaysia, who ranked 26, falling three notches from last year. Since the 2017 rank, Hong Kong’s position fell by two spots to 37, while Thailand went down the index by one spot to 45.

As the U.S. failed to share of new science and engineering graduates in the labor force and set up value-added manufacturing, President Trump´s America fell to 11th place.

Innovation ranks across the rest of the world

Prinn Panitchpakdi, country head of CLSA Thailand, an Asian brokerage and investment group, said the U.S., Korea and China share a common trait, which is that people accept failure as part of the process.

“Innovation lags in countries where the culture emphasizes risk avoidance and where R&D is seen purely an expense, not an investment. That’s the mindset in Thailand”, he continued.

For the first time since 2014, South Africa and Iran moved back into the top 50. Turkey jumped to 33rd because of improvements in tertiary efficiency and productivity, among others.

New Zealand and Ukraine, on the other hand, faced a shift and lost positions, as they were hurt by a lower tertiary-efficiency ranking.

Russia stumbled following sanctions related to Ukraine and the plunge in energy prices, finishing at No. 25.

Bloomberg‘s top-ten innovation index ranks countries based on their research and development expenditure, productivity and concentration of high-tech public companies.