A bronze statue of a girl went missing in New York, provoking a public debate over gender equality and art.

The girl was last seen in the New York City financial district facing down a large bull.

She left only a pair of footprints and a not-so-cryptic message in her wake.

“Fearless Girl is on the move to The New York Stock Exchange,” the message read. “Until she’s there, stand in for her.”

The Fearless Girl statue was originally placed adjacent to that of the Charging Bull in the northern corner of Bowling Green Park in March 2017.

The group that installed the piece, State Street Global Advisors, said it did so to “raise awareness about the importance of gender diversity in corporate leadership.”

The investment management firm claims that between the time the statue went up and September 2018, more than 300 companies have added a female director to their leadership teams.

However, the firm and its statue have also been at the center of a few controversies.

NPR’s Camila Domonoske reported in October 2017 that a Department of Labor investigation found the sponsors of the state, State Street Global Advisors, had underpaid female and black executives.

In addition, the artist behind the Charging Bull statue, Arturo Di Modica, has called the Fearless Girl an “advertising trick” that turns the subject of his own sculpture into a villain. As a result, another artist, who supported Di Modica’s view, created a third sculpture of a dog peeing on the bronze girl’s leg, which made a brief appearance in May 2017 before being taken down.

The relocation of Kristen Visbal’s Fearless Girl closer to the New York Stock Exchange took place in December but was announced last April via a joint statement made by State Street and New York City mayor Bill de Blasio.

“Our hope is that by moving her closer to the NYSE she will encourage more companies to take action and, more broadly, that she will continue to inspire people from all walks of life on the issue of gender diversity,” State Street Global Advisors President and CEO Cyrus Taraporevala said.

Meanwhile, local television station WABC reported that conversations among city officials regarding both statues had focused on the traffic hazard they represented. They were both located on the narrow end of Bowling Green Park, which also acts as a median on busy Broadway—where crowds gathering for photos of the statues often spilled over into the avenue.

“This move to a new location will ensure that her message and impact will continue to be heard, as well as improve access for visitors,” De Blasio said in April’s statement.

The mayor’s spokesman Eric Phillips also tweet- ed around that time that the Charging Bull statue “will almost certainly be moved” as well.

The more than three-and-a-half ton, 18-foot-long bronze bull was originally placed on Broad Street right in front of the NYSE building on December 15, 1989, by Di Modica but was removed later that day and relocated to its current home at Bowling Green Park.

Intended to be just a temporary display standing for a few weeks, the smaller Fearless Girl statue became too popular to be removed, according to WABC. For example, the television station spoke to the Aranda family, who had walked by the statue every day on the way to school for the one year plus that it had been there.

“We definitely are going to miss her,” Leonardo Aranda told the television station, adding that “raising boys who stand up for women and raising strong girls who go on to be strong women” was important and something the family try to communicate to their kids. 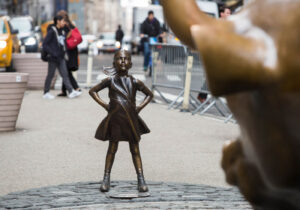 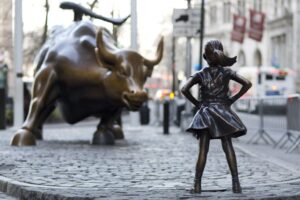