A painting by Baroque artist Bartolomé Esteban Murillo was attempted to be restored. Tragically.

Murillo’s Immaculate Conception has been “restored”, but the man who was paid by a Valencia-based collector for it to be cleaned left the face of the Virgin Mary unrecognisable.

This was the second attempt to restore it to its original state, this time by a furniture restorer who was paid €1,200 ($1,355; £1,087). The tragic job has moved conservation experts in Spain to call for a tightening of the laws covering restoration work.

In a statement, the country’s Professional Association of Restorers and Conservators (Acre) condemned the lack of legal protections, and called the recent incident an act of “vandalism”.

The incident has forced people to remember the also failed restoration of an Elias Garcia Martinez fresco on the walls of the Santuario de Misericordia de Borja church in Zaragoza, Spain, which turned the scourged face of Christ into a Playmobile figure. 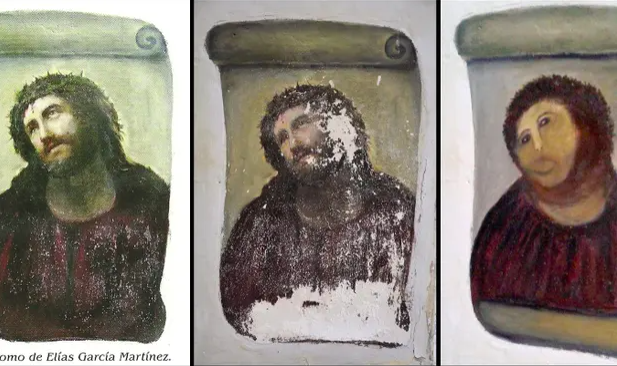 Fernando Carrera, a professor at the Galician School for the Conservation and Restoration of Cultural Heritage, said such cases highlighted the need for work to be carried out only by properly trained restorers. “I don’t think this guy – or these people – should be referred to as restorers,” Carrera told the Guardian. “Let’s be honest: they’re bodgers who botch things up. They destroy things.”