A guy born to win

A guy born to win

CEO Michael Dell is making headlines once again as he takes his company public in an unusual and controversial way.

Michael Dell is a man who is confident in the fact that his bets will pay off.

He founded the company now known as Dell Technologies in his dorm room at the University of Texas in 1984, and by the age of 27 had become the youngest-ever boss of a Fortune 500 company.

By comparison, Mark Zuckerberg was nearly 29 when he first made the list in 2013.

Dell is currently the chairman and CEO of Dell Technologies, which was formed in 2016 when Dell acquired computer storage giant EMC. The estimated $67 billion merger was the largest technology acquisition ever. Yet Michael Dell had already revolutionized the business of personal computers years earlier by selling them directly to customers, adopting just-in-time manufacturing and lean, global supply chains that undercut rivals.

And the man—and the company he leads— continue to evolve.

Dell-EMC returned to public markets on Dec. 28, 2018, nearly six years after Dell took it private in what was then the biggest buyout since the financial crisis of 2008. Shares opened at $46 on the New York Stock Exchange, giving Dell-EMC a market capitalization of $34 billion, according to Forbes. 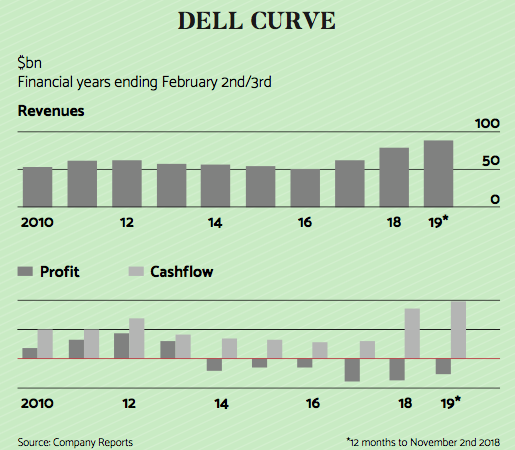 The December IPO was somewhat unconventional.

Dell-EMC bought back shares that tracked the financial performance of software maker VMware, in which the former held an 81% stake. Buying back the shares allowed Dell to bypass the traditional IPO process, which would likely have involved a grilling by investors over the company’s $52.7 billion debt pile.