Extraction Oil & Gas is growing, and for President Matt Owens, innovation is the key.

As recently as ten years ago, the average oil and gas company would have had to develop at least a square mile of land to drill all the wells it needed for production.

Yet Extraction Oil & Gas is currently deploying innovative technology to minimize impacts traditionally associated with onshore oil and gas development, often using as few as ten acres of land—a strategy that has enabled the company to develop a large amount of resources via very small amounts of surface.

This in turn minimizes disturbances to the surrounding communities and leaves more land available for other productive uses.

“Most people think oil and gas wells are drilled in the middle of Texas and nobody lives anywhere around there,” says president and co-founder Matt Owens.

“We’re less than an hour north of Denver in longstanding oil fields that have recently been encroached on by Colorado’s population boom. Because we’re able to employ such unique and intricate designs with our well bores, we’re still able to reach a large amount of resources under these areas.

“Back when Extraction was founded, companies in Northern Colorado were just starting to drill horizontally, which is pretty much all anybody does in the industry now. We had some ideas and creativity regarding this and saw it as a way of opening up reserves in the ground that previously were not easily accessible.”

Extraction has proven itself to be equally innovative in finding ways to go above and beyond state and federal regulations to uphold its social license to operate.

The company has repeatedly raised the bar on its own safety, environmental, and operational approach, implementing best management practices, noise and emissions mitigation, and new methods to help the industry and the community comfortably co-exist.

Founded in 2012, Extraction Oil & Gas, LLC is a Denver-based oil and gas company that focuses on the exploration and production of oil and gas reserves in the Rocky Mountains.

Its core operating area is in the Greater Wattenberg Field where the company has an active drilling program targeting the horizontal development of the Codell and Niobrara formations.

While Extraction remains a relative newcomer to the energy industry, its development and growth have been impressive.

When the company first started production in 2014, it was producing approximately 200 barrels of oil per day. Today, it produces over 80,000 BOE/d, a rate of growth that has set Extraction on its way to becoming one of the largest oil and gas producers in Colorado.

Unsurprisingly, Owens is keen to stress the company’s potential for the future.

“Energy is something everybody across the country uses every hour of every day,” he explained.

“We have a substantial amount of reserves, twenty or more years of drilling inventory, thousands of locations to develop, and access to markets through both intrastate and interstate pipeline networks. We have marketing agreements to sell our crude oil all the way down to the Louisiana coast, and we also have our own subsidiary company which is going to build its own pipeline infrastructure to help transport and deliver these resources. That benefits our communities by sharply reducing truck traffic and virtually eliminating water and oil storage tanks on our well sites.”

“I think one of the main differentiators for us is that we’re one of the few single-basin focused energy companies when a lot of the other companies, especially the larger ones, are focused in multiple states and regions across the country. That allows us to really hone our focus surrounding engineering skills and efficiency gains, because we’re always working in the same environment and continually trying to make that better. At the same time, having a defined home community allows us to maintain a stable and experienced workforce and to better partner with our communities.”

“Obviously, we won’t be able to keep a 100- 200% growth rate going year over year as we get larger. What we’re focused on now is becoming self-funding and then try to grow at a steady 15- 20% production rate out of the cash ow we are generating. That is, ultimately, the sustainable path that is best for our shareholders, our talented employees, and the local economy.”

A strategy built for success

Owens believes that both improving cycle times on drilling through completion, and a handful of strategic alliances, are crucial to Extraction maintaining its early success.

For example, according to Owens, it used to take the company up to twelve months from beginning to drill a well to that well producing energy.

However, over the past couple of years, Extraction has reduced its drilling times from fifteen days to roughly three days and is today able to start producing in just a few months—an advancement that Owens largely at- tributes to the innovations derived from the company’s drilling and completions departments and the efficiency gains of its completion partner, Liberty Oil eld Services Inc.

“What we’ve been focused on is how fast we can go from putting a dollar into the ground to having that dollar produce revenue back and we’ve done that through pretty big collaborations with our partner service companies as well as efficiency gains through engineering innovations, for example, in terms of completions, Liberty has been integral to our success, and we have been pretty integral to theirs. They’re the company that fractures, or completes, every well that we drill and that was typically the longest cycle of the operations process.” 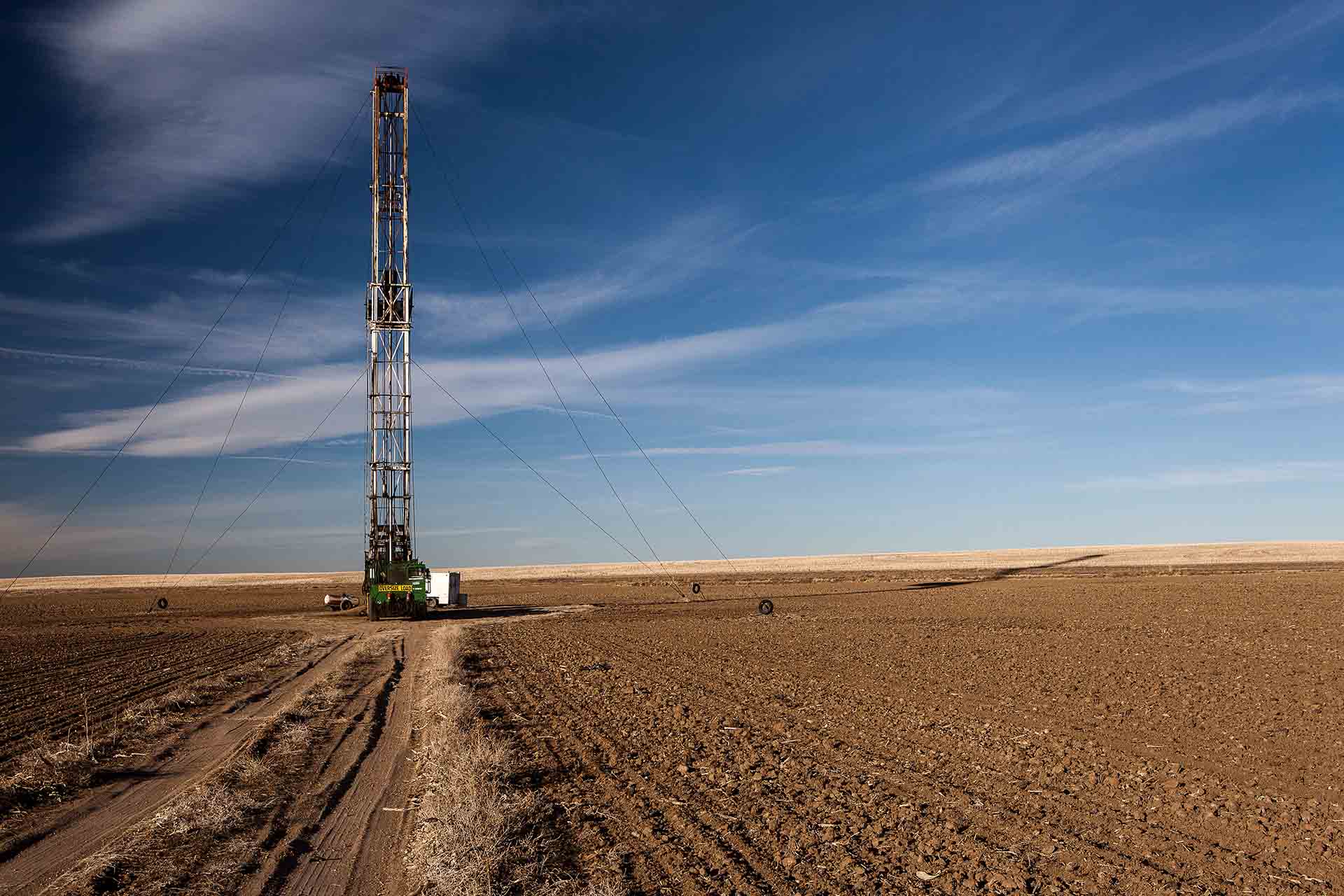 “To put it in perspective, every day, Extraction moves 20 million pounds of sand, which is a unit train or more that has to be delivered, put into storage facilities, and then put into boxes and trucked out to our locations,” Owens added. “It’s a very intense process with a lot of different moving pieces. But we’ve been able to collaborate with Liberty and build infrastructure the right way to keep up with the pace at which Extraction has been moving.”

In terms of the future, Owens highlights the combination of deepening Extraction’s relationships with suppliers and continuing to pursue technological innovations as the keys to continued success for the company, enabling it to develop fields in areas of Colorado that would have been impossible to develop just a few short years ago.

“One thing that’s helped our operations move as quickly and efficiently as they do is we haven’t changed the suppliers that we use very often,” he outlined on the subject of strategic partnerships. “In the beginning, it was very hard to establish supplier relationships, but we were able to find other small companies that were starting up at the same time and partner with them. Together, we’ve all been able to grow, and in fact, Liberty IPO’d earlier this year and they’re about a two-and-a-half- billion-dollar publicly traded company now.”

Meanwhile, technological innovation has enabled Extraction to reduce its impact on both the environment and local communities.

For example, with its wholly-owned subsidiary Elevation Mid- stream, LLC, the company is building an extensive oil, water, and gas pipeline network that has allowed it to reduce the number of trucks required to carry such materials from anywhere between 4,000-5,000 during the drilling-to-completion process to just a couple of hundred per well.

“We always have to keep in mind that we are in a more populated area and have to operate in a way that’s different than most other oil and gas companies,” Owens explained. “We were the first company in the Rocky Mountains to start plugging our drilling rigs into the electrical grid and now they’re as close to silent as they can possibly be. On the completion side, with Liberty we developed what’s called the Quiet Frac Fleet, which is so quiet that it’s under the OSHA [U.S. Occupational Safety and Health Administration] threshold of requiring hearing protection.”

Returning to the subject of Extraction’s finances, Owens describes a company working hard to become what he calls a “cash flow-neutral, cash-flow-positive energy company.”

“This is kind of a new thing in the energy sector,” he insisted. “Not a lot of energy companies have been able to self-fund their operations and our goal to be able to do that as such a young company was a very steep goal, but it’s something we are very close to achieving right now.”