When Eira Thomas was appointed CEO of Lucara Diamond Corp. in February, it was a homecoming of sorts.

Thomas, who boasts 25 years’ experience in the mining industry and was previously CEO of Kaminak Gold Corp., had not only served on the board of directors of Lucara since 2009, but was also one of the founders of the company.

“The CEO role at Lucara came along at the perfect time in my career,” she says, “having sold my gold company, I was looking for new opportunities. The outgoing CEO, William Lamb, had made a decision to retire, and it was an opportunity to get more involved in the company that I had helped found ten years ago.”

Lucara Diamond Corp. is a diamond exploration and mining company, established in Canada but which operates exclusively in Botswana through its Karowe mine, where, in November 2015, the 1,109-carat Lesedi La Rona, the world’s second largest gem-quality diamond ever discovered, was extracted.

In 2017, the company enjoyed revenues of over $220 million and is currently looking towards both technology and fresh management ideas to take itself forward.

With its recent acquisition of Clara Diamond Solutions, for example, Lucara is looking to develop a secure, digital, cloud-based sales platform for diamonds, which the company hopes to roll out by the fourth quarter of this year and which Thomas believes could be a game changer in the industry.

“Lucara is the world’s foremost producer of large high-value gem-quality diamonds (…) Karowe is a high-margin mine, we have no debt, and the company pays a healthy dividend. Going forward, we want to use this solid platform to explore new avenues for growth.”

The Karowe mine, located in north-central Botswana in southern Africa on the fringe of the Kalahari desert, is a hard rock, open-pit diamond mine, 324 meters in depth, which is 100% owned by Lucara Diamond Corp. and will operate until at least 2026. Yet, while the project has already reaped considerable fruit, Thomas says the company has plans to develop the mine even further, employing technology that is at the cutting edge of the mining industry.

“We’re in the process of completing a study examining the potential for expanding the mine underground, to extend its life from 2026 to 2036. We completed a positive preliminary economic assessment in 2017 and launched a formal feasibility study earlier this year, which is expected to complete in early 2019.”

According to Thomas, these plans are unfolding at a clip despite a number of hurdles the company has faced over the past eighteen months, including equipment availability issues related to the completion of a major waste stripping campaign to access the ore body for open pit mining between 2019 and 2026.

“Once we have completed the waste removal campaign, our strip ratio will reduce and our costs will go down, ultimately leading to improved margins for the remaining open pit mine life.”

Lucara Diamond Corp. is the first diamond company to incorporate what is known as X-Ray Transmission technology (XRT), which permits a high purity level in the sorting of materials, irrespective of size, and which has enabled Lucara to reduce the value destruction of diamonds as they are mined, enabling the company to recover very large stones without breaking them.

“Lucara and TOMRA forever changed the diamond industry with the introduction of TOMRA XRT solutions to replace DMS and XRL processes,” said Geo rey Madderson, Diamond Segment Manager for TOMRA, a crucial partner of Lucara. “After the recovery of the 1109ct Le Sedi la Roni and 810ct Constellation, our partnership forged a new gold standard approach that is now operating all around the world.”

“We’ve really developed a reputation for being a leader in innovation,” Thomas insisted.

“What also sets us apart is our approach to future diamond sales. Our aim is to start selling diamonds through Clara Diamond Solutions, a secure, digital, web-based platform that will use proprietary analytics together with existing cloud and blockchain technologies to sell diamonds individually, rather than in batches and create assurance on diamond provenance from mine to final retail sale.

According to Thomas, the recent acquisition of Clara Diamond Solutions offers the opportunity to modernize a supply chain which she considers static and in flexible and leads to losses across the entire diamond pipeline.

For the first time ever, manufacturers will be able to purchase only the diamonds they want for the polished they need, unlocking value throughout the value chain and resulting in improved margins for both buyers and sellers. 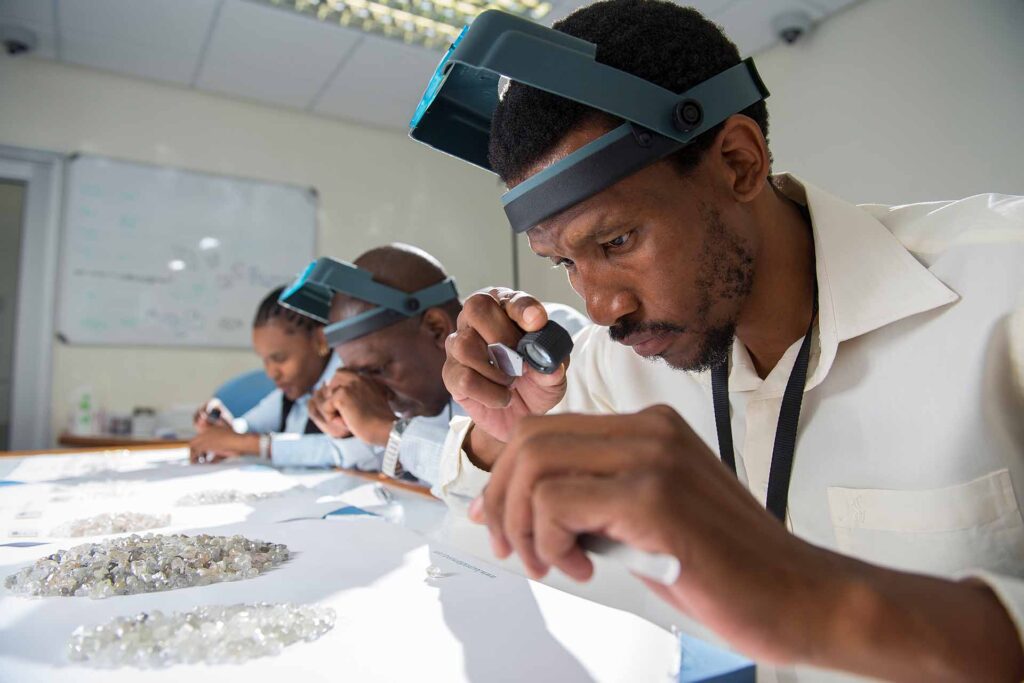 Thomas is highly aware of the fact that the company owes its success to the people of Botswana whom make up 95% of its workforce and without whom the success of the Karowe mine would be impossible, and the company is eagerly looking to deepen its relationship with the country.

Looking ahead, Lucara has also recently made some significant management changes, one of which Thomas is especially proud of—the appointment of Naseem Lahri, a Botswanan woman, as the managing director of its subsidiary Lucara Botswana.

“Naseem is the first Botswana women to serve as the managing director of a diamond mine in Botswana.,” she said.

“Another key senior leader is Joe Mchive, our General Manager at Karowe. Joe works hard to deliver safe, reliable production. Together Naseem and Joe work to maximize opportunities in Country through the development of a strong local workforce and by procuring local supplies and working closely with all of our local communities of interest to support local businesses.

“We’re very proud to be working in Botswana and would like to find additional opportunities in country to help us grow. Karowe is a unique, high margin asset and our job is to maximize its value to our shareholders and all of our local stakeholders in Botswana.”