A new survey on poverty reveals that 16% of Canadians “struggle” to make ends meet.

More than a quarter of Canadians are facing serious financial hardship. So say the results of a new study released Tuesday as part of an examination of poverty by the Angus Reid Institute.

Twenty one per cent of respondents said they can’t afford to go for dental care, while one quarter reported they have recently had to borrow money to buy groceries.

Angus Reid has said that it tried to go beyond the usual income-based measures of poverty, seeking respondents’ personal experiences in order to paint a picture of the ability of Canadians to make ends meet in the real world.

Respondents were asked about twelve money-related situations, including whether they’ve ever used a food bank, if they’ve ever failed to pay a utility bill, and if they can afford to go for dental care. 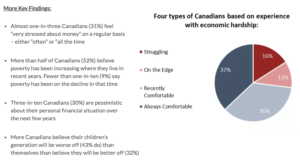 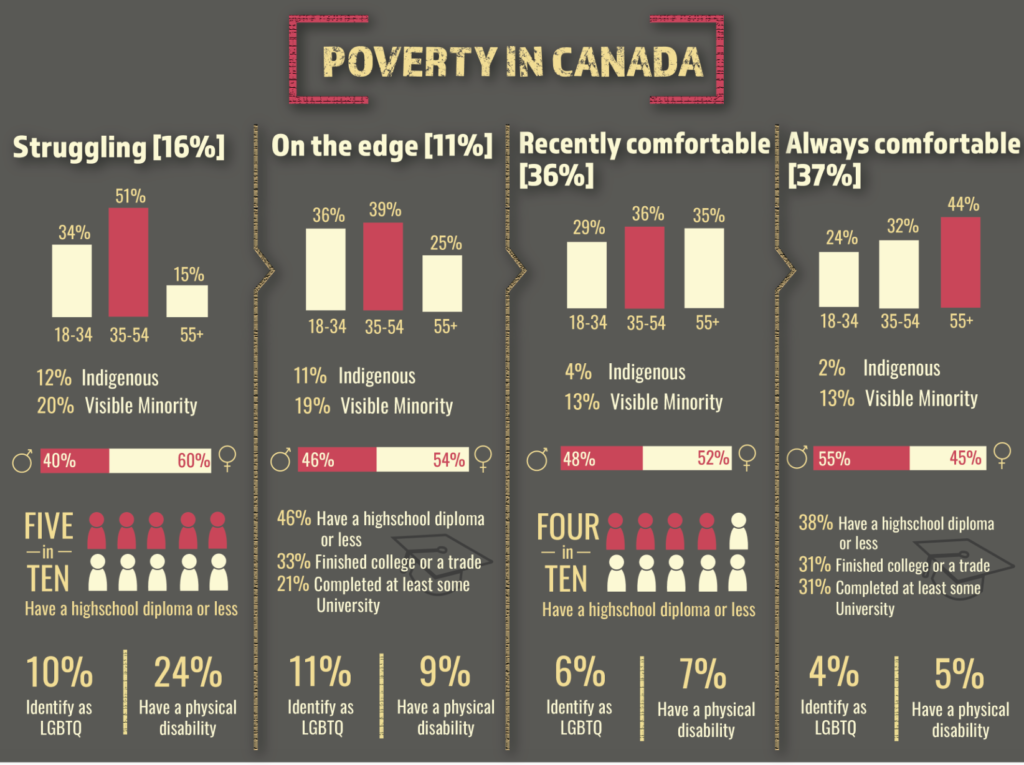 Using this method, Angus Reid categorized them into four groups. They placed roughly 16% of the population in the “struggling” group whose members have faced at least four of the twelve poverty-related situations described above. Some 77 percent of Canadians in this group are facing at least one of the situations on an ongoing basis.

The second group was titled “on the edge,” which accounted for some 11 percent of Canadians – people who have only recently begun to face such challenges but are on the verge of serious difficulty.

The rest of the Canadian population was evenly spread over the other groups: the “recently comfortable” and “always comfortable.”

Angus Reid highlighted that household income is highly correlated with the four groups, although less so than many might expect. For example, more than 1-in-5 people in the “struggling” segment had household incomes between $50,000 and $100,000. Instead, survey responses indicated they were facing difficulty because of debt, the cost of living in their area or the expense of raising children.

Notably, when asked how they viewed the prospects for their children, Angus Reid reported that Canadians were “almost uniformly pessimistic.”

The full survey can be found at http://angusreid.org/ari-poverty-study/