The US Census Bureau reveals a more diverse nation than was previously expected.

The U.S. Census Bureau has just released its last batch of race-ethnic population estimates in advance of the 2020 census, with data indicating that the national headcount will reveal a more diverse nation than was previously expected. The new estimates show that nearly four of 10 Americans identify with a race or ethnic group other than white, and suggest that the 2010 to 2020 decade will be the first in the nation’s history in which the white population declined in numbers.

Over the decade’s first nine years, racial and ethnic minorities accounted for all of the nation’s population growth, and were responsible for population gains in many states, metropolitan areas, and counties that would have otherwise registered losses due to declines in their white populations. And while the U.S. and more than half of its states have shown absolute declines in populations under age 25, such declines were largely due to white losses among the youth population. These declines would have been even greater were it not for youthful gains among racial and ethnic minorities, especially the Latino or Hispanic population.

The past several censuses have shown increased racial and ethnic diversity among the U.S. population. In 1980, white residents comprised almost 80% of the national population, with Black residents accounting for 11.5%, Latino or Hispanic residents at 6.5%, and Asian Americans at 1.8%. (Except for Latinos or Hispanics, data for all racial groups pertain to non-Latino or Hispanic members of those groups.)

By 2000, the Latino or Hispanic population showed a slightly higher share than the Black population: 12.6% versus 12.1%. The Asian American population share (including Native Hawaiians and Pacific Islanders) grew to 3.8%, while the white population share dropped nearly 10 percentage points, to 69.1%. 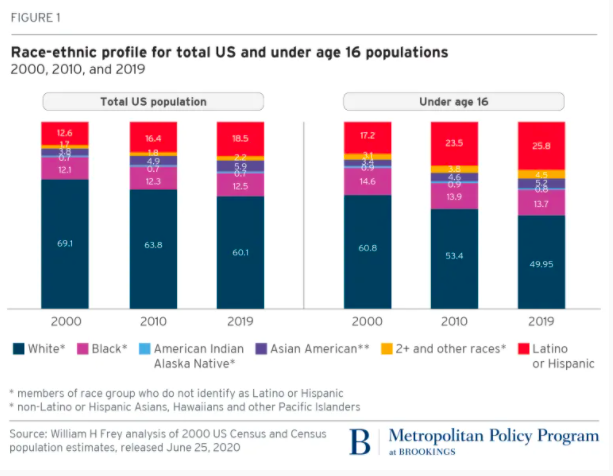 The new data shows that, by 2019, the white population share declined nearly nine more percentage points, to 60.1%. The Latino or Hispanic and Asian American population shares showed the most marked gains, at 18.5% and nearly 6%, respectively. While these groups fluctuated over the past 40 years, either upward (for Latinos or Hispanics and Asian Americans) or downward (for whites), the Black share of the population remained relatively constant.

The declining white population share is pervasive across the nation. Since 2010, the white population share declined in all 50 states (though not Washington, D.C.) (download table A), and in 358 of the nation’s 364 metropolitan areas and 3,012 of its 3,141 counties. Moreover, as of 2019, 27 of the 100 largest metropolitan areas have minority-white populations, including the major metropolises of New York, Los Angeles, Washington, D.C., and Miami—as well as Dallas, Atlanta, and Orlando, Fla., which reached this status by 2010 (download Table B).

Most noteworthy is the increased diversity in the younger portion of the population. In 2019, for the first time, more than half of the nation’s population under age 16 identified as a racial or ethnic minority. Among this group, Latino or Hispanic and Black residents together comprise nearly 40% of the population. Given the greater projected growth of all nonwhite racial minority groups compared to whites—along with their younger age structure—the racial diversity of the nation that was already forecasted to flow upward from the younger to older age groups looks to be accelerating.

A modest but unprecedented decline in the nation’s white population 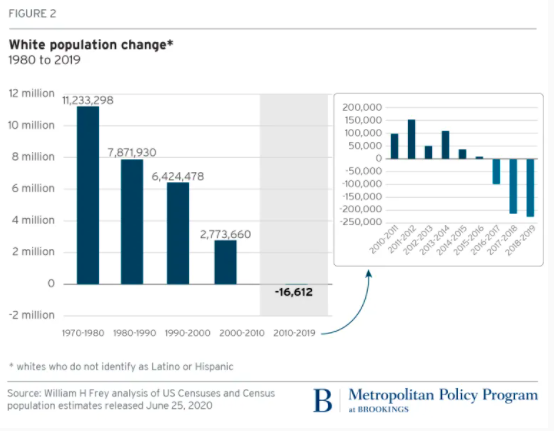 Second, the Census Bureau was not projecting white population losses to occur until after 2024. This makes any national population growth even more reliant on other race and ethnic groups.

The white demographic decline is largely attributable to its older age structure when compared to other race and ethnic groups. This leads to fewer births and more deaths relative to its population size. In 2019, the white median age was 43.7, compared to 29.8 for Latinos or Hispanics, 34.6 for Black residents, 37.5 for Asian Americans, and 20.9 for persons identifying as two or more races. The new census estimates show that, in contrast to other groups, white Americans sustained a natural decrease (an excess of deaths over births) of 1,073,206 over the 2010 to 2019 period. The loss was partially attenuated by the net gain of 1,056,594 white immigrants.

While a white growth decline could be anticipated, it was accentuated in the past few years by a reduction of births among young adult white women (likely a delayed reaction to the Great Recession) and an uptick in deaths, perhaps associated with drug-related “deaths of despair.” Also, as with other race-ethnic groups, white immigration to the U.S. recently slowed. Thus, the projected decline in the white population occurred eight years earlier than census projections predicted, contributing to the lower growth in the total U.S. population.

Race-ethnic minorities are responsable for all the nation growth

The unanticipated decline in the country’s white population means that other racial and ethnic groups are responsible for generating overall growth. Nationally, the U.S. grew by 19.5 million people between 2010 and 2019—a growth rate of 6.3%. While the white population declined by a fraction of a percent, Latino or Hispanic, Asian American, and Black populations grew by rates of 20%, 29%, and 8.5%, respectively. The relatively small population of residents identifying as two or more races grew by a healthy 30%, and the smaller Native American population grew by 7.6%.

For most of these groups, natural increase was the primary contributor to growth. Net immigration accounted for 74% of Asian American growth, but just 24% of Latino or Hispanic growth. 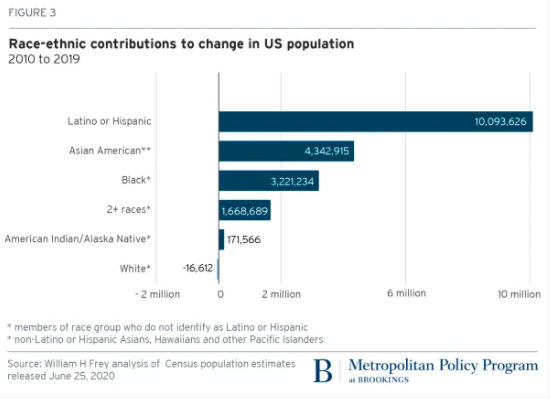 When translated into population totals, Latinos or Hispanics contributed 10 million people—over half of the nation’s 2010 to 2019 growth. Asian Americans, Black residents, and persons of two more races contributed 4.5 million, 3.2 million, and 1.7 million people, respectively. These groups constituted the main engines of the nation’s growth, and are likely to do the same going forward.

This is not just the case nationally, but for many individual areas within the United States as well. While white population losses are not evident in all parts of the country, it is fairly pervasive, with the main exceptions being places that attract white internal migrants. Between 2010 and 2019, 27 states and 47 of the 100 largest metropolitan areas showed white population losses. The areas with the largest white population gains were highly represented in the Sun Belt (download Tables C and D).

Despite losses in white populations, only four states and eight metropolitan areas experienced total population declines. In all of the other areas with white population losses, other race-ethnic groups more than made up for the decline. Metropolitan Miami, for example, lost 120,000 whites over this period, but gained 600,000 people from other groups, especially Latinos or Hispanics.

A broader view can be seen by looking at the nation’s 3,100-plus counties. Among them, 2,251 counties—home to nearly 60% of the nation’s residents—sustained losses in their white populations over the 2010 to 2019 period. Yet, in 576 of those (where well over half of that population resides), white losses were more than countered by gains in racial and ethnic minority populations. These include an array of types of places (cities, suburbs, and rural areas) in all parts of the country. Especially represented are those that lie within major metropolitan areas, including New York, Los Angeles, Houston, Washington, D.C., and Miami.

A decline in the younger generations, tempered by nonwhite gains

Another notable trend observed in the new census data is an overall decline in the nation’s population under age 25. In a country that is rapidly aging, an absolute decline in this youthful population represents a demographic challenge for the future.

A major reason for this decline lies in the fact that a good part of the aforementioned white population loss is concentrated among those under age 25. Low fertility and an aging white adult population (with proportionately fewer women in child-bearing ages) reflects a long-term impediment to future white youth gains. There are two other factors contributing to this decline: a late-decade downturn in white immigration and the fact that the somewhat-larger generation of white millennials began “aging out” of this group, only to be replaced by the smaller-sized Gen Z cohort.

To some extent, these factors also contributed to the small losses for Black and Native American populations under age 25. However, these losses have been partially made up for with gains in young populations of Latinos or Hispanics, Asian Americans, and persons of two or more races.

The relative youth of the Latino and Hispanic population, in particular, contributes to higher levels of natural increase. Along with Asian Americans, they also benefit from immigration. Hence, the 5.3 million-person decline for white, Black, and Native American populations under age 25 this decade was reduced to a net 1.6 million loss due to the positive contributions of Latinos or Hispanics, Asian Americans, and persons identifying as two or more races.

The national white decline in the under-25 population also impacts states and other areas. Since 2010, 29 states sustained losses in this young population, led by California, New York, and Illinois. Each of these states lost young whites and were not able to counter those losses with gains from other groups (download Table E). In 17 additional states, including Texas and Florida, other racial and ethnic groups were able overtake white losses to yield total gains in their young adult populations. Only four states—Utah, North Dakota, Idaho, and South Carolina—showed a gain in white young people over the 2010 to 2019 period. Going forward, growth in America’s youth will become increasingly dependent on nonwhite minority contributions.

As I have written previously, racial and ethnic diversity will be an essential ingredient of America’s future. The mostly white baby boomer culture that defined the last half of the 20th century is giving way to a more multihued, multicultural nation. The demographic underpinnings for this have been set in place for a while, but the new census data places an exclamation point on them. It suggests that past projections of increased racial and ethnic diversity may have been too cautious given the accelerated aging and decline of the white population. We will know more when the full 2020 census results are released next year.

One fact is already clear: As the nation becomes even more racially diverse from the “bottom up” of the age structure, more attention needs to be given to the needs and opportunities for America’s highly diverse younger generations. The demography alone dictates that this will be necessary to ensure success for these youth and the nation as a whole.