Social networks experienced a pandemic-driven boost in 2020—but not equally.

The coronavirus pandemic boosted social media usage around the world, as many people stayed home for weeks or months. In 2020, there will be nearly 150 million more social network users worldwide than we expected before the pandemic—more than the entire population of Russia. That will lift the total to 3.23 billion, well ahead of our predictions in November 2019 and June 2020. As a result, nearly 81% of internet users worldwide will be social network users this year. 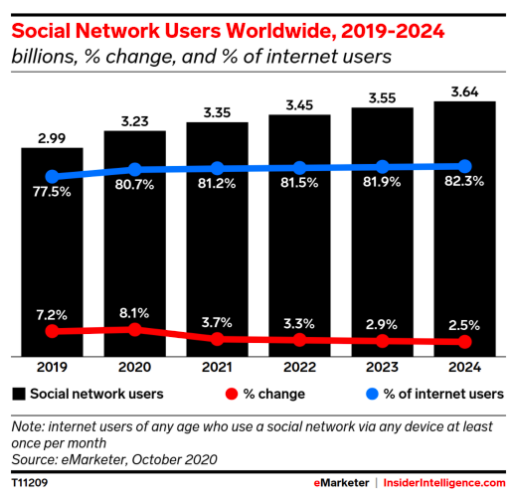 In China, for example, which is home to the world’s largest national population of social network users, an estimated 889.5 million people—97.3% of all internet users—will visit social platforms at least monthly in 2020. That’s a gain of 7.0% compared with 2019. Before the pandemic, we anticipated 4.8% growth in 2020. The change means, in effect, there will be over 58 million new social network users in China in 2020 alone—compared with the less than 40 million new users we predicted late in 2019.

Moreover, we’ve revised our estimates upward for all the leading social networks globally. Facebook, Instagram, Snapchat, and Twitter are all gaining new users, though not all will benefit equally from this year’s growth.

Facebook will continue to dominate global social networking through the end of our forecast period in 2024. In fact, Facebook is still the only platform used by more than half of the world’s social networking population; that share will hit 59.0% in 2020. The pandemic has helped to revitalize a relatively sluggish platform, which will post 8.7% growth in global user numbers in 2020. Facebook’s total user numbers will surpass 1.90 billion—about 100 million more than we anticipated in November 2019. But growth remains negative in a few countries, including Germany and Japan.

Instagram continues to benefit from Facebook’s difficulties and will see the biggest percentage increase of any platform worldwide this year, growing its user base by 22.9%. That will push its total number of users above 1 billion for the first time. In our November 2019 forecast, we didn’t expect it to reach that milestone until perhaps 2024.

Snapchat will see global user numbers rise by 16.1%, partly as a result of new features and partly as a consequence of TikTok’s troubles, especially in India, where TikTok is now banned. Growth is also coming from a much smaller base than Instagram’s.

In most regions, Twitter is used much less than Facebook, Instagram, and Snapchat—but growth will be steady (8.4% in 2020), thanks to the platform’s starring role as a source of up-to-the-minute, bite-sized news and opinions in a year that was highly volatile politically, socially, and economically.