Washington governor Jay Inslee announced on Friday that he will seek the Democratic nomination for president.

The main mission statement on Inslee’s campaign website is all about climate change, but it also illustrates how it can affect a large range of other issues, including the economy and national security.

Inslee is certainly the first candidate to make climate change the centerpiece of his campaign.

According to The New York Times, former Vice President Joseph R. Biden Jr. is in the final stages of deciding whether to run for president and has told allies he is skeptical the other Democrats eyeing the White House can defeat President Trump.

According to a new NBC News/ Wall Street Journal poll., 66% of Americans now say they’ve seen enough evidence to justify action, up from 51% two decades ago.

That figure incorporates 85% of Democrats, 79% of independents, 71% of women, 61% of men and strong majorities of all racial groups.

Resistance comes only from the one-third of Americans who identify themselves as Republicans. A 56% majority of GOP voters believe either that concern about climate change is unwarranted or that more research is necessary before taking action. 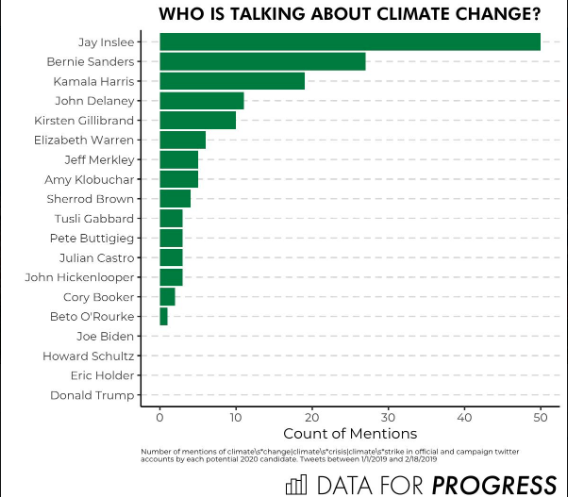