Volkswagen and Ford Motor Co. will join forces on commercial vans and pickups.

With an eye on saving billions of dollars, Volkswagen AG and Ford Motor Co said on Tuesday they will join forces on commercial vans and pickups to explore joint developments on electric and self-driving technology.

The partnership was announced at the Detroit auto show and it will start with the sales of vans and medium-sized pickups in 2022, the deal will not involve a merger or equity stakes.

Investors had already prepared for a deal centered on vans and pickups, now they will turn their focus to the potential for additional deals they believe could offer greater savings, these include potential deals around development of electric or self-driving vehicles, as well as combining forces in markets including North America, South America, Europe or China.

The President and CEO of Ford Motor Company Jim Hackett and Volkswagen CEO Herbert Diess said at the North American International Auto Show in Detroit, Michigan, that this union highlights the growing pressure on global automakers to manage the costs of developing electric and self-driving vehicles.

“You can’t do this alone,” said Ford’s CEO, Jim Hackett. The two CEOs did not discuss details of the alliances in specific markets including Latin America, where Ford is losing money, however, they both signed a memorandum of understanding to jointly develop electric and self-driving vehicles. Both executives said they were optimistic those deals would be finalized but provided no timeline. 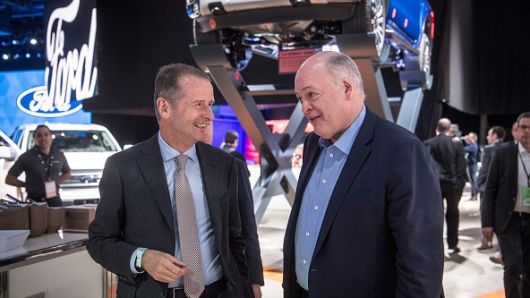 Jim Hackett and Herbert Diess at the at the North American International Auto Show in Detroit, Michigan, on January 14th, 2019.