Wells Fargo CEO Tim Sloan to step down immediately after 31 years at the company.

Wells Fargo CEO Tim Sloan is stepping down effective immediately as the bank struggles to overcome a litany of scandals.

Sloan said it was his decision to relinquish control of Wells Fargo as a way to help the bank move forward amid scandals. Wells Fargo’s board has pledged to find an outsider to replace Sloan, who plans to retire at the end of June. The company tapped C. Allen Parker, its general counsel, to take over on an interim basis.

“I have decided it is best for the company that I step aside,” said the three-decade veteran of Wells Fargo, Tim Sloan, through a statement. “It has become apparent to me” that Wells Fargo will “benefit from a new CEO and fresh perspective”.

The shake-up comes as Wells Fargo has faced repeated calls from politicians, including Senator Elizabeth Warren, who has urged the company to find new leadership to fix its broken culture. Warren celebrated the decision by saying it’s “about damn time.”

Wells Fargo’s issues began in September 2016 when the Consumer Financial Protection Bureau (CFPB) fined the bank $185 million for opening and charging fees on more than 1 million accounts for customers without their consent. 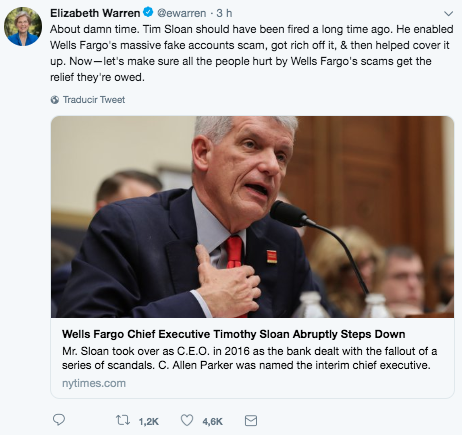 According to CNN Business, beyond the fake-accounts scandal, Wells Fargo has admitted to charging thousands of borrowers for auto insurance they didn’t need and hundreds of homebuyers mortgage fees they didn’t deserve. Last year, Wells Fargo said about 545 homeowners lost their homes due to an apparent software glitch with the bank’s loan modification process.
CEO Staff2019-03-28T23:36:02-06:00