A harsh competition for the top of the summit

A harsh competition for the top of the summit

Walmart, the retail giant, overtakes Apple as the No. 3 online retailer in U.S.

Walmart is one of the fastest growing ecommerce businesses in the world.

The retail giant, which includes Walmart, Sam’s Club and Jet.com, will capture 4% of all online retail spending in the U.S., totaling $20.91 billion.

This will turn the company into the third largest ecommerce retailer in the U.S. by the end of 2018, surpassing Apple, who will grow just over 18% this year, according to eMarketer—less than last year— as domestic sales for smartphones and other consumer electronic devices begin to slow down.

An eMarketer analyst, Andrew Lipsman, said: “The retail giant continues to make smart acquisitions to extend its ecommerce portfolio and attract younger and more affluent shoppers. But more than anything, Walmart has caught its stride with a fast-growing online grocery business, which is helped in large part by the massive consumer adoption of click-and-collect.”

Although Walmart climbs fearlessly towards the top, Amazon remains the king of ecommerce, and the crown is not in danger anytime soon.

Despite ecommerce is becoming a rising market, one that will grow 16.0% to reach $525.69 billion in 2018, no one can really take on the Jeff Bezos behemoth, who grows at an astounding pace and can bag 48.0% share of the total U.S. ecommerce of this year.

Amazon’s domestic growth is coming from three categories: apparel and accessories, health and beauty and food and beverage, but its lack of leadership has them very aware of the competition around them, and the risks of losing retail sales.

Ecommerce will make up 9.8% of total US retail sales this year, and a bloody battle-royal for the top of the mountain has just broken out. Stay tuned. 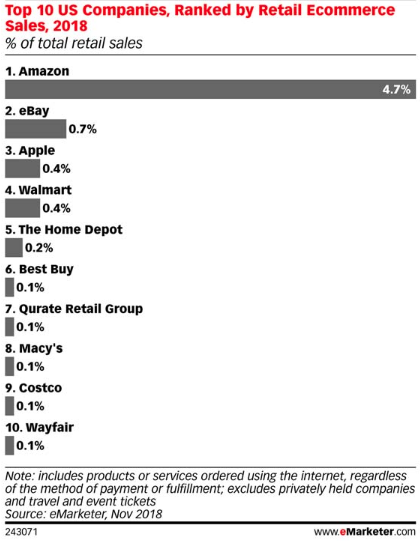