Medical marijuana has been legal in Canada since 2000. The novelty is that recreational market will be open on October.

The sale of recreational cannabis will become legal across Canada on October 17th. 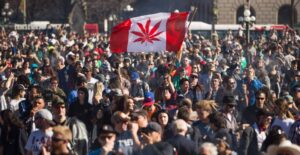 Canadians consumed as much as $6.2 billion of marijuana in 2015. Cannabis users in Canada is estimated at 4.9 million people.

In the western province of Alberta, Tokyo Smoke, a private-sector firm, plans to open pot shops that are more like hipster cafés. In British Columbia illegal outlets have long masqueraded as “dispensaries”. Newly legal, some plan to kit themselves out like upmarket pharmacies.

Marijuana is transforming into the darling of daring investors, and the nascent legal weed industry is excited about the prospects for profits, but there are many risks to investing in this tricky business.

Canopy Growth, a Canadian cannabis holding company, is representative of the hope and potential woes that go with buying stock in an industry still negotiating existence.

Under Canada’s scheme for legalising cannabis, the federal government will regulate production and set minimum standards for safety. Consumers must be 18 or older and may possess no more than 30 grams. But each of the ten provinces and three territories will decide how to distribute the stuff to 12m potential consumers (the number of Canadians who say they have indulged at least once) plus visitors.

In Ontario, the most populous province, cannabis shops will keep the product out of sight. Customers will fill out order forms, which employees will execute in back rooms, however, the province’s new premier, Doug Ford, whose late brother was a crack-smoking mayor of Toronto, may have other ideas, as he has mused about allowing sales in private shops.

New Brunswick, an eastern province, will require cannabis to be kept behind glass. In Nova Scotia it will be displayed behind a counter, except in one central store, where customers will be able to sniff the weed.

The race is on

Prime Minister Justin Trudeau had promised to give provinces, municipalities and marijuana businesses between eight and 12 additional weeks to prepare for the new reality. The scheduled start date, October 17th, gives them more than that (17 weeks).

Private shops will be freer to “pursue a delightful retail experience”, says Ms Brown, though the delight will be curbed by a federal rule that cannabis be sold in plain packages bearing large, yellow labels and smaller red ones warning of health hazards. There will be room (just) for the logo of the producer.

For now, it’s a risky business and competition is still limited—but that means lots of opportunity for the intrepid.

With information from CONAHEC