The hard work on the NAFTA 2.0

The hard work on the NAFTA 2.0

Trump is tweeting against the US partners in Nafta; he should hammer internal threats instead.

By Oso Oseguera, who is Editor in Chief at Chief Executive Officer North America and Latin America. He firmly believe life is better aboard a bicycle.

The United States needs to regain its competitive edge in manufacturing while also grappling with its two-tiered labor market and finding ways to make economic growth more inclusive. 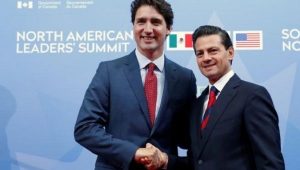 Mexico, US, and Canada are set to Renegotiate NAFTA Deal. Image credit: teleSUR

Manufacturing remains a pillar of the US economy and the primary industry in some 500 counties, of some 3,000, from coast to coast. The sector drives 30% of the nation’s productivity growth, 60% of its exports, and 70% of private-sector R&D spending—all factors that keep the nation’s innovation machine humming.

So, what’s going in on with the North American Free Trade Agreement (Nafta) 2.0? On August 27th Trump took his smartphone and tweeted that both Mexico and Canada were being “very difficult”. He made a pause and then added: “May have to terminate?”

If he has any strategy, Trumps is bullying the negotiators of getting a better deal by threatening to pull out altogether… that is odd. The worst idea is that he is overwhelmed by a wrong fact.

In an event on July 17, Trump launched “Made in America” week and sent Congress a list of his goals for the renegotiation of the Nafta. The main objective is to reduce the US’s trade deficit, presumably by stamping more stuff with “Made in the USA.” But that is wrong.

Manufacturing is not dead, but it can’t longer be a millions machine jobs creator, nor well-paying ones. But it can still supply other valuable ingredients for overall economic growth. Making things requires big spending on research and development. That leads to innovation and increases competitiveness. Manufacturers are also big exporters.

Early this year, the American industry was expecting that the new administration would lead to more tax cuts than trade tensions, but Trump began his aggressive Nafta campaign and his corrosive tweets and the position that America will withdraw from the trade. Suddenly the deal had louder champions in American business, including the energy and technology industries.

Canada and Mexico seem unruffled by Trump’s latest threats as they go into the second round of Nafta renegotiations on September 1st. Earlier ones prompted panicky phone calls from the Mexican president and the Canadian prime minister. After the latest blast, Mexico’s foreign ministry merely released a sniffy statement that “Mexico will not negotiate Nafta …through social media.”