No end in sight to pandemic in US

No end in sight to pandemic in US

Coronavirus cases are rising across more than half of the United States even as the outbreak slows across former hotspots.

New COVID-19 infections are up by at least 5%, based on a seven-day average, in 26 states as of Sunday, compared with just 12 states a week ago, according to a CNBC analysis of data compiled by Johns Hopkins University.

Interestingly, new cases in former hotspots like Arizona, Florida, California and Texas, are declining by at least as much, though those states still accounted for nearly 10,000 new cases on Sunday—or around a fourth of all new U.S. cases. Many of the current rising outbreaks are taking place in the Midwest, including Indiana, Iowa, Kansas, Michigan, Minnesota, Missouri, Nebraska, Ohio and the Dakotas. Those states collectively reported more than 7,400 new cases Sunday, according to Hopkins data. Texas added 4,846 new cases on Monday bringing its seven-day average of daily new cases to 3,940, according to Johns Hopkins data. The state has seen more than 100% increase in its seven-day average compared with a week ago. Arizona is averaging about 2,500 daily new cases as of Monday, which is about a 94% increase since one week ago.

New cases are also still rising in a number of southern states. Alabama has reported an average of more than 1,400 new cases a day over the past week, up more than 53% from a week ago, and South Carolina has reported an average of over 905 daily infections, up 15% from last week. New cases nationwide have been on the decline for more than a month, but the rate of decline has slowed over the past few days. The seven-day average of new cases per day has risen over the last two days after weeks of decline. It now stands at just over 42,100, down just 1.2% compared with a week ago — more than double the daily average in early June, according to a CNBC analysis of Hopkins data. The worrying trends across the Midwest come days after Centers for CDC (Disease Control and Prevention) Director Dr. Robert Redfield said the region was “getting stuck” when it comes to fighting the virus. “We’re starting to see some of the cases now in the red zone areas are falling, but if you look at those states that are in what we call the yellow zone, between 5% and 10%, they’re not falling, so middle America right now is getting stuck,” he said in an interview with the Journal of the American Medical Association. “We don’t need to have a third wave in the heartland right now.” Redfield said the desired outcome would be to bring the number of daily new cases reported across the country to below 10,000 and the number of new COVID-19 deaths reported each day below 250. The recent rise in new cases comes as many of the country’s students head back for in-person learning at colleges and K-12 schools. 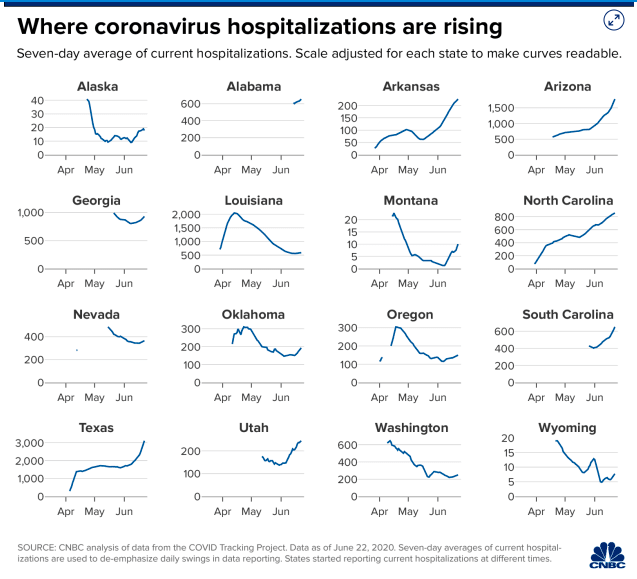 Dr. Scott Gottlieb, former commissioner of the Food and Drug Administration, said Monday that states that are seeing major spikes in new cases are heading into a “pivotal week” that could determine whether “they’re tipping over into exponential growth or not.”

The University of Iowa reported 130 cases last week after students returned to in-person classes. Other universities and public school districts across the country have also reported worrying outbreaks, prompting some schools to shift to virtual learning. The recent uptick in many states is particularly worrying as the Labor Day weekend and fall season are quickly approaching. Many believe that the turn in the weather and the onset of regular flu season could well see people drop their guard against the virus.