Canada and others have said that the US tariffs appear to be improper safeguards, but Trump administration argues the contrary.

US President Donald Trump’s administration has filed a World Trade Organization (WTO) complaint against the retaliatory tariffs Canada imposed on US products in response to Trump’s tariffs on Canadian steel and aluminum. 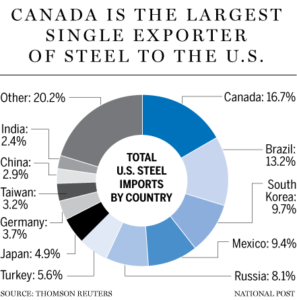 Trump rattled world markets when he proposed tariffs of 25% on steel and 10% on aluminum.

Canada has previously launched a WTO challenge against the US tariffs, which Foreign Affairs Minister Chrystia Freeland calls illegal. The basic argument from the Trump administration, announced Monday, is that Trump’s tariffs are legal but the retaliation is not.

The US announced WTO disputes against not only Canada’s retaliatory tariffs but also those imposed by China, the European Union, Mexico and Turkey.

Under WTO rules, countries are, under certain conditions, to impose temporary “safeguard” tariffs to protect a domestic industry against a damaging surge in imports. Other countries are allowed to retaliate.

Canada and other countries have said that the US tariffs appear to be improper safeguards. But the Trump administration argues that they are not safeguards at all. Rather, the US says, they are being imposed under a national security rule under which retaliation is not allowed.

Trump invoked a controversial national security provision of US trade law as his official justification for the 25% steel tariffs and 10% aluminum tariffs. But he has frequently made a different argument in his speeches, saying that the purpose of the tariffs is to fix trade relationships he believes are unfair.

It could take “two or three years” to settle the WTO disputes related to the US tariffs, said Lawrence Herman, a Canadian trade lawyer. He said the case is “critical,” since it raises issues “that have never been litigated in the WTO before” — and since Trump’s commitment to the WTO already seems to be wavering.

On Monday, Freeland spokesperson Adam Austen repeated Freeland’s criticism of the US tariffs and her defense of Canada’s tariffs, which Austen called “measured” and “perfectly reciprocal.”

“The tariffs imposed by the United States on Canadian steel and aluminum are unacceptable and illegal,” Austen said. “As Minister Freeland has said repeatedly, it is absurd to view any trade with Canada as a national security threat to the US”.

Canada imposed retaliatory tariffs on 235 US products on July 1. US steel was hit with a 25% tariff. US aluminum and other products, ranging from soups to sleeping bags, were hit with a 10% tariff.