As the UK gradually reopens, mayors of leading cities are looking to implement a new social distancing friendly model of mobility which could also help the environment.

As the UK gradually reopens after lockdown, mobility in Manchester, the country’s third city, is beginning to look very different.

This past weekend, as the British government relaxed restrictions on social distancing, barriers closed a stretch of Deansgate, the city’s main drag, to motor vehicles, while new pedestrian walkways and bike lanes appeared.

Manchester is joining other UK cities such as Glasgow, Leicester, York, and Brighton in creating new spaces for walking and cycling so that residents can enjoy the outdoors and commute to work without worrying too much about social distancing. On Friday, May 15, the Mayor of London, Sadiq Khan, said he would also be shutting some of capital’s busiest thoroughfares, touting the plan as a view to creating one of the largest car-free areas of any city in the world.

“Many Londoners have rediscovered the joys of walking and cycling during lockdown,” Mr Khan said in a statement. “By quickly and cheaply widening pavements, creating temporary cycle lanes and closing roads to through traffic we will enable millions more people to change the way they get around our city.”

Most of the changes being implemented are naturally a response to the coronavirus crisis and the risks of reopening the country too quickly. But many local authorities say that provided they go over well with residents, some of them could be made permanent.

“By ensuring our city’s recovery is green, we will also tackle our toxic air, which is vital to make sure we don’t replace one public health crisis with another,” Mr Khan stated.

Actors wearing protective masks perform inside a theater during the first live theater show in the country as the Czech government lifted more restrictions allowing public events up to 100 people if it’s possible to keep social distancing on May 12, 2020, in Jablonec nad Nisou, Czech Republic. (Photo by Gabriel Kuchta/Getty Images) 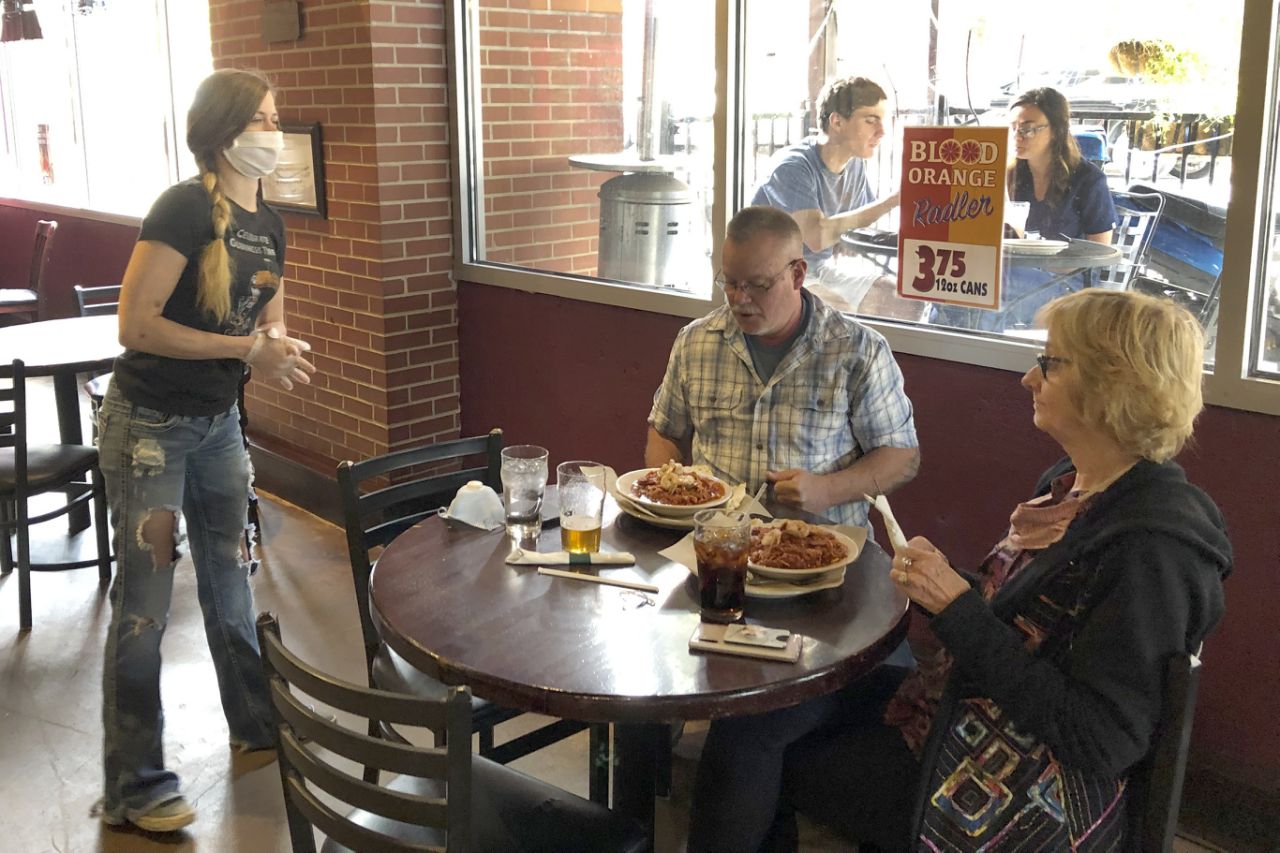 Anna Barnard, left, wears a protective mask as she talks to Greg and Judy Robinson at Dugan’s Pub in Little Rock, Arkansas on Monday, May 11,2020. (AP Photo/Andrew DeMillo)

The British government has acknowledged that working out ways for citizens to travel while maintaining social distancing is one of the biggest challenges it faces as it starts to lift the coronavirus lockdown.

The current government advice is: don’t use public transport if you can avoid it. Yet the dilemma is that if people take to their cars instead, the country’s streets will be jammed with traffic. As a result, UK Transport Secretary Grant Shapps ordered English local authorities to make “significant changes” to their transport infrastructure give more space to pedestrians and cyclists and announced the creation of a £250 million ($303 million) emergency fund to encourage what he called “active travel.” Mr. Shapps said the money was the first instalment of a £2bn ($2.5bn)  package for cycling and walking.

Through this initiative, local councils can use temporary traffic orders to widen pavements, install cycle lanes, create new zebra crossings, and close entire streets to traffic. Yet many hope that the changes will be permanent as a way of reducing dependence on privately owned cars and encouraging a greener approach to mobility.

“Some of the projects Manchester is introducing have been in the planning process for years,” councilor Angelik Stogia, Manchester’s lead member for Transport and Environment, told the media in a recent interview. “We hope that pedestrians and cyclists will reclaim the streets of this city.”

The aim is that these initiatives will help achieve the authority’s goal of making the city carbon-neutral by 2038 as well as creating a healthier, more pleasant city. Greater Manchester’s cycling commissioner Chris Boardman, says cycling has increased by more than 70% on some days since the lockdown in the region.

“What coronavirus has shown is that if you give people safe, traffic free streets they will walk more and ride bikes”, he told the media. “Not only is it the right thing to do to protect people now, but it’s vital to meet our clean air goals and protect our NHS long-term.”