China’s next goal: The moon

China’s next goal: The moon

As Earth is apparently too small for China’s economic ambitions, the country has recently revealed its plan to create the first Earth-Moon economic zone by 2050.

Anyone say space race? A familiar player wants in.

According to Global Times, On October 30th, Bao Weimin, director of the Science and Technology Commission of the China Aerospace Science and Technology Corporation, revealed the ambitious plan to establish an Earth-moon space economic zone by 2050. He said this at a seminar on space economy, pledging that the country would hurry to study the reliability, cost, and flight-style transportation system to successfully plan and ultimately build an earth-moon space economic zone, as there is huge economic potential, according to Bao.

Bao also mentioned that the basic technology is set to be finished by 2030, while the key transport technology is expected to be created by 2040 and inaugurate before 2050, this after a China launched a relay satellite to set up a communications link between the Earth and the then planned Chang’e-4 lunar probe, which accomplished the first-ever soft landing on the far side of the moon. This was praised as a historic moment for human space exploration as the successful touch down, according to The Guardian, turned into a major technical feat and an important step for China towards enhancing its capacity for scientific and technological innovation and widening ambitions in the international space race.

When the announcement was made, divided opinions flooded the web, however, many see this as a big step in getting ahead in the race for space. Aerospace fans even predicted that the plan of this Earth-moon space economic zone will accelerate many important projects for the country, including the Long March-5 carrier rocket, China’s largest launch vehicle, which is expected to be used to send the Chang’e-5 probe in 2020 to bring moon samples back to Earth, in what would be the country’s first independent interplanetary mission. The Long March-9, China’s heavy-lift carrier rocket, is also expected to receive more support and investment after the announcement by Bao Weimin, as it is scheduled to make its first flight around 2030, supporting manned lunar exploration, deep space exploration, and construction of a space-based solar power plant.

Though the OECD estimates that China now has the second-highest combined civil and military space budget in the world, it is still difficult to estimate the full cost and times of building and operating a permanent space station like China ambitions, even because some Chinese officials have also started to share and express their growing concerns on whether the country can or cannot afford to continue to heavily invest in various space programs. Non the less, Lt. Gen. Zhang Yulin, deputy commander of the China Manned Space Program, clearly indicated that China will use the next 15 to 20 years to develop the requisite technical capabilities for conducting manned lunar missions. 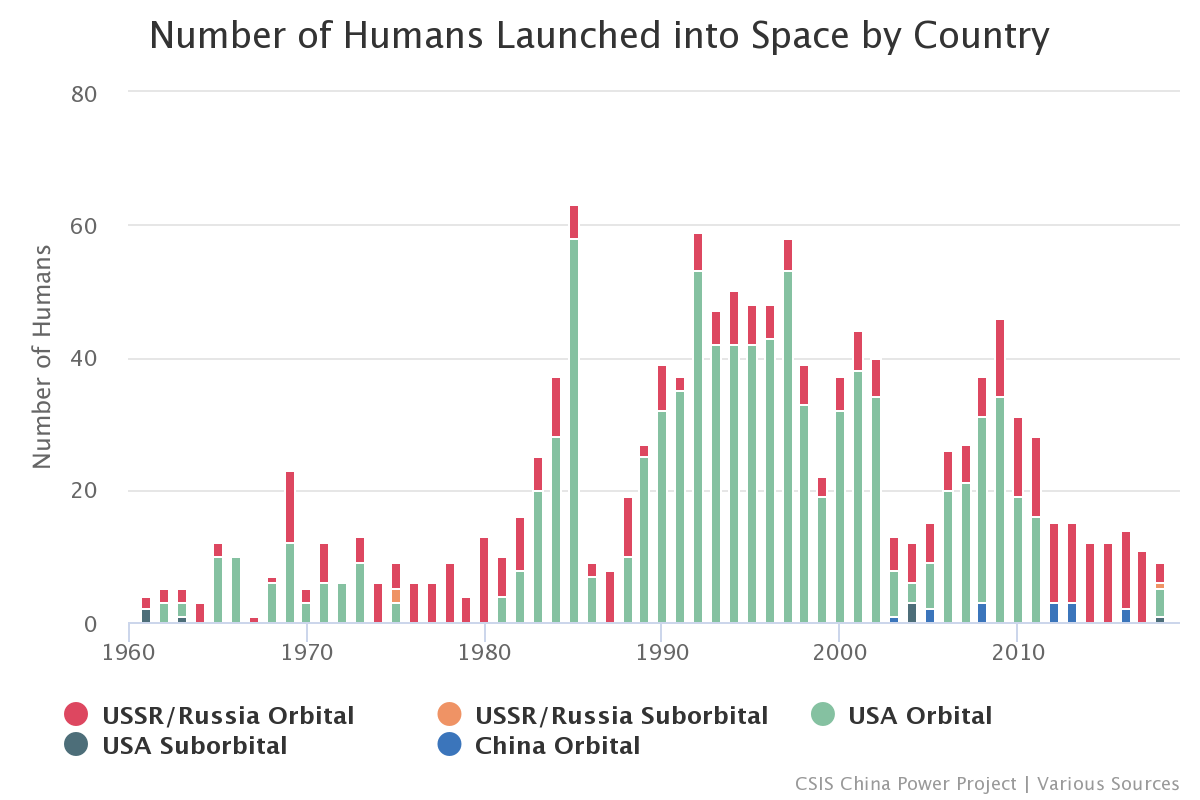 Competition and the other players

The United Nations Office for Outer Space Affairs (UNOOSA) reports more than 60 countries that have space programs that engage in activities ranging from the development of dual-use satellites to lunar exploration.  However, only three of these have independently sent humans into space:  The former Soviet Union and the United States achieved human spaceflight during the Cold War space race.  Four decades later, China joined this elite group with the 2003 launch of Lt. Col. Yang Liwei into Earth’s orbit on the Shenzhou-5. Yang orbited the Earth 14 times over a period of 21.5 hours.

Other countries like Canada are doing their part. Even though they have spent very little on its space program compared to others previously mentioned, both in terms of its outlay in dollars and relative to GDP, private Canadian companies are picking up the slack with projects like the Montreal-based NorthStar, which highlights as one of several high-tech Canadian space-focused companies with either existing projects or exciting ideas in the pipeline of reaching and competing in the space race of today. Toronto-based Kepler Communications is also heavily working, as it currently has two small satellites in space—launched on Chinese and Indian rockets—with plans to add 138 more within three years.

Space exploration is interesting to everybody in the United States, no matter age, gender, educational or political groups. According to data from Pew Research Center, roughly seven-in-ten Americans (72%) say it is essential for the U.S. to continue to be a world leader in space exploration, and eight-in-ten (80%) say the space station has been a good investment for the country, despite continuous growth of private sectors like SpaceX and Virgin Galactic.

The race for space continues. Who’s to win?